Crestwood Music Shop offers music lessons for all ages. Whether you want to learn how to play your first note or you are interested in advancing your playing skills, you’ll get lessons from professional music instructors at the best rates in town. Our instructors are specialized in teaching guitar, violin (viola / fiddle), banjo, piano (keyboard) and the ukulele. You’ll love our music instructors, our comfortable studio and the music instruction.

Clay has been playing guitar for 20 years and studied a variety of styles and genres. He’s played in blues, post rock, jam, American, jazz fusion and experimental bands and has written country songs and performed solo instrumentals on guitar using live looping and sampling. He’s worked in live sound, home recording, including a variety of DAW software and hardware, using effects pedals, synthesizers and other amenities for the modern musician, and has experience in audio electronics, building guitar amplifiers and effects units. Clay takes lessons for beginning guitarists interested in any style or intermediate players interested in advancing their skills, or those interested in learning effects, live sound, playing with a band or recording their music at home. He can teach sight reading and music theory to improvisational rock guitar.

Tessa has been playing piano since she was five years old. She plays mainly classical piano and is currently learning pieces by composers Ernesto Lecuona and Johannes Brahms. She teaches piano from beginner to intermediate level students. Tessa is a student at South Oldham High School and is an active member of KUNA and KYA, as well as Beta Club. In her spare time she enjoys reading, travelling, and volunteering at the Humane Society.

Bradley McKinney has been playing piano since the age of 7 and began saxophone lessons at the age of 9. He attended Barret TMS and played in the band and was also in All-County concert band in ’07 and ’08. He also played in EKU’s concert Honor’s Band in 2007.

Upon graduating high school, Bradley attended the University of Louisville and performed in the Marching Band between 2014 and 2016 and studied in the Jazz program, earning his Bachelor of the Arts degree in Jazz Studies with a Minor in History. During his time at UofL, Bradley studied saxophone under the direction of Mike Tracy and performed with many guest adjudicators including Doc Severinson and Adam Nussbaum and also attended master classes from Derek Brown, Bill Evans, Mark Colby, and Don Braden. Bradley also was a student of the 2016 Jamey Aebersold Jazz Camp and traveled with the Jazz department to Bogota, Colombia in 2018 to study music on a student exchange.

Since 2018, Bradley has been teaching piano and saxophone and working as a health insurance broker. He has been featured on a number of recordings from local artists such as Joe Gomez and the local band, Church Friends. He plays frequently around the city with Church Friends, Boa, and the Swing Street Big Band and is also the keyboard player and part songwriter for the Adrian Taylor Band.

Sam has taken 7 years of classical guitar… but he teaches and loves blues, jazz, rock, and folk guitar, starting at any level and any age. Sam also teaches bass.
Terry Braehler

Terry teaches 5-string banjo, 3-finger style. He has been playing banjo since 1971. Terry’s goal is to teach you to play banjo, not just repeat songs. Terry also plays bass, guitar and the mandolin. Terry retired from GE Appliance Park after 37 years of service and enjoys teaching because he wants to pass on his knowledge of the instrument. His other hobbies include cooking, woodworking, reading (mostly history), and collecting old advertising art. Come over to the store, meet Terry, and let him show you how to pick.
Lance Pfeiffer

Lance began violin lessons at age 12, continuing for six years with a Julliard trained instructor. He has played with the Louisville Youth Orchestra, graduating from Concert, to Repertory and finally to the Symphony orchestra. He was a member of the All County (3 years) and All State ( 2 years) orchestras. Recently, he has served in the IU Southeast Summer String Clinic, in the St. Bernadette choir and has travelled to NYC for a performance at Carnegie Hall.
Lance is devoted to reviving the love of orchestral music in a new generation.

Lessons with these Music Instruments

We offer beginner banjo lessons for all ages and all styles.

Piano method book or stage keyboard playing in our studio.

All ages can learn how to jam with the trendy ukulele.

All levels of violin, viola or fiddle instruction including formal & fiddlin'. 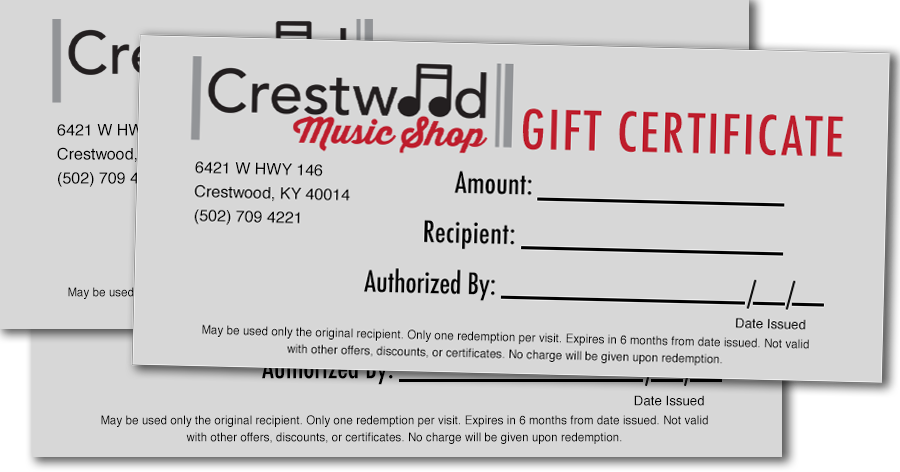 Give the gift of music with Gift Certificates from Crestwood Music Shop. Perfect for the holidays, birthdays or other special occasions.​​